If you are looking for an interesting way to teach history to girls, consider Pleasant Company's series, American Girls. Homeschool parents are finding that this series brings American history to life for their elementary aged daughters in a way that other books don't.

The American Girls books are actually a collection of several series of books. Each series focuses on one main character and takes place during a certain historical period. The books are extremely accurate and the depictions of era, culture, and historic figures are impressively correct. The series and the time in which they take place are:

Christian homeschooling parents should read the last two books before allowing their children to read these books in the series. There are situations that might be objectionable to some people. For example, there is one scene in the Julie books in which she consults astrology. Always read ahead to be sure that you are comfortable with the situations in which the characters find themselves.

If you prefer to use a completed unit study rather than create one yourself, there are some options that you may be interested in.

Portraits of American Girlhood is a 250 page unit study based on these books. It is intended for one year of history and includes worksheets, maps, and project ideas. This study is written from a creationist/Christian perspective and can be used with grades two through five or adapted for older students. It also features ideas for including boys in the study if you plan on using it for a mixed group.

Kit and the Depression

A to Z Home' s Cool has a movie review on the film that was made from these books as well as some links to resources that could be used to supplement the teaching of the Depression while using the Kit books. A little more work is involved than using a prepared unit study, but there are some excellent ideas.

Write Your Own Unit Study 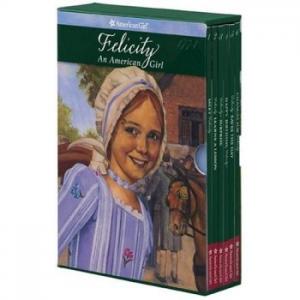 Making your own unit study is not difficult and is especially effective with series like the American Girls. Homeschools have been creating unit studies from the beginning and it is something that, while it takes time, is one of the best ways to teach. You have the ability to use techniques and projects that are geared toward your child's specific needs as well as enhance your own teaching style.

Unit studies of this sort are perfect for notebooking. Since the series are done in chronological order they transition easily from one to another. Some suggestions for using these books to teach are:

Resources on the Internet

There are other ideas to help you get started all over the Internet. Here are some websites you may find helpful:

Whether you use these books to create a unit study or just to make a memory, American Girls are books that will be remembered for years to come. They are an excellent historic resource and allow your homeschooled child to get a feel for how people acted, lived, and felt during important American time periods. Merely having them on the shelf in an unschooling environment is beneficial because they are so much fun to read.