Animals are precious to the world. However, there are lots of animals that are becoming threatened or endangered because of climate changes, habitat loss and other issues. Find out the endangered and threatened animal species, and what puts them on this list.

The IUCN Red List of Threatened Species includes more than 27,000 species of which 25% are mammals. Unfortunately, there are so many endangered species, including jungle animals, in the world that creating a truly complete list is difficult. However, the following table of endangered animals will give you an idea of the many animals that are endangered or critically endangered due to lost habitat, diminishing food supplies, pollution and other concerns.

Check out the table or download a printable copy of the endangered animals list. If you need help downloading the printable list, check out these helpful Adobe tips. 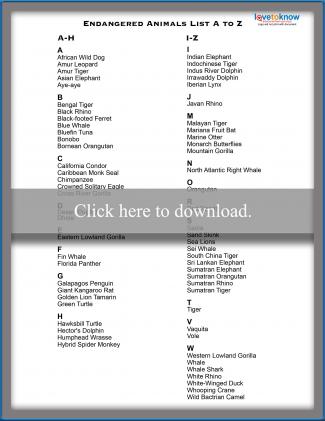 Threatened Animals From A to Z

Any animal that is threatened is put in danger. While knowing the endangered animals is important, knowing what animals are vulnerable and could become endangered helps environmentalists know which animals to watch. Find out some animals are threatened by checking out the list below.

Animals that are endangered are closer to extinction that those that are threatened. When they are endangered, it means that the number of animals in the wild have decreased by more than 50%, and they could go extinct in 20 years. The animals that are threatened or vulnerable have a greater chance for surviving, but are still losing their population at a rapid rate. They also have a lower probability of extinction at 10% within the next century. While extinction might be worse, any animal that is on the vulnerable list needs help to increase its numbers. Awareness is key.

Everyone loves animals, especially kids. Help them learn about extinction and the species that are endangered and threatened through this list. For more fun with animals, explore some interesting animal facts or wild animal printables.