The United States (U.S.) Civil War was an important part of American history that took place from 1861 to 1865 between the Union States and the Confederate States. Throughout the war, new states were formed and some states switched sides, which is why a list of Union states can help you better understand the Union side.

Alphabetical List of Union States in the Civil War

There were 20 states considered Union states and 5 Border States, which were considered Union states because they never seceded from the Union. Altogether, there were technically 25 states included in the Union States of the U.S. Civil War. However, West Virginia didn't become a state until the middle of the war, so the Union started out as 24 states. Abraham Lincoln was their President.

These five states did not secede from the union, but they also didn't support Abraham Lincoln at first. At the start of the war, these states wanted to remain neutral and not choose a side. In 1862, the Border States had no choice but to take a side, and they became part of the Union. However, the people living in these states fought on both Union and Confederate sides based on their own personal beliefs and loyalties.

You can use a free printable list of Union states to help you keep track of who was on what side during the U.S. Civil War. If you need help downloading the printable, check out these helpful tips.

Before the Confederate States seceded from the Union, all states were part of the Union known as the United States. This Union began with the original 13 colonies. Use this list to see which states formed the Union in the beginning and when they became states. 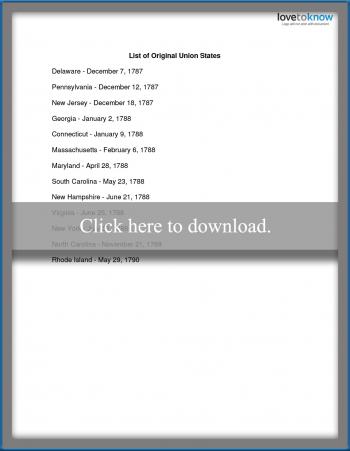 Printable List of Union States in the Civil War

You can use this free list of all 25 Civil War Union states to help you remember which states remained part of the Union throughout the war. 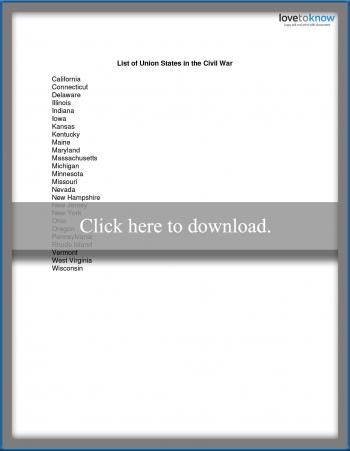 Order of States Joining the Union

When each territory became a state, it was officially admitted to the union known as the United States of America. This list shows when each Civil War Union State became an official part of the Union. Keep in mind that each Confederate State was once part of the Union and some states didn't become states until after the Civil War.

The Sides of the Civil War

The Confederacy was concerned with the division between slave and free states and issues of states' rights. These southern states no longer felt that they were being represented in government. The result was a devastating Civil War that lasted until 1865. The country, communities, and families were torn apart as individuals and states took sides.

What Is a Union State?

The definition of a Union State during the Civil War is any officially recognized state that did not secede from the Union. These states were generally concentrated in the Northern half of the country, operated under the direction of President Abraham Lincoln, and called themselves The United States of America.

After Abraham Lincoln was elected President of the United States in 1860, seven Southern states seceded from the Union and formed The Confederate States of America. They were:

Map of Union and Confederate States

To get a better idea which states belonged to which side, take a look at a map of the states during the civil war. You can see that Oregon and California were particularly isolated from the rest of the Union. 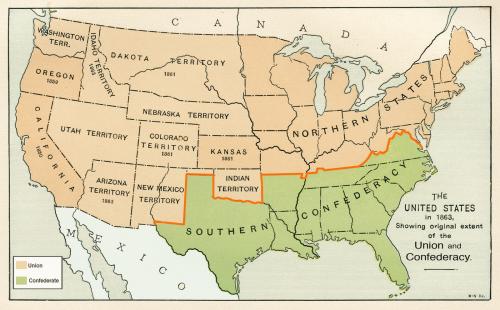 Unification of States and People

While the Union states weren't completely united, they did stick together in many ways during the U.S. Civil War. In the end, the Union states won, but people in many states continue to show Confederate pride today.

0
Comments
© 2006-2021 LoveToKnow, Corp., except where otherwise noted. All Rights Reserved.
List of the Union States During the Civil War