A list of vice presidents in chronological order is a helpful resource for your homeschooling history or government lessons. Get to know who all the Vice Presidents of the United States are, when they served, and which President they served with.

If you want to use the list as a quick reference guide for extended lessons or even tests and history projects, you can print a PDF list of Vice Presidents. Click on the image of the list to download and print it. If you need help downloading the printable list, check out these helpful tips. 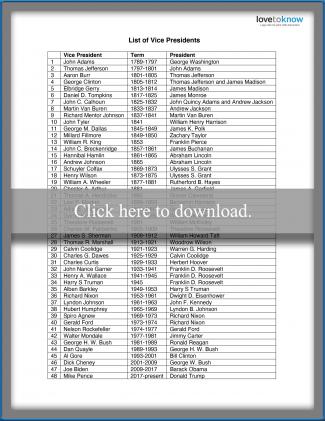 Vice Presidents (VPs) might be second in command of the country, but they sometimes lead lives more interesting than the Presidents. Learn even more about VPs with fun facts.

A list of Vice President's in order can help you see how some became President while others served super short terms. Whether they were elected or selected, Vice Presidents have played a big role in American history. You can also continue your U.S. leader learning with Presidential fun facts.