The U.S. presidents are an important part of history. But sometimes remembering who was the first and who was the 37th can be difficult. Finding and using a list of U.S. presidents can come in handy in your classroom. Not only will it help for memorization but your student(s) can use it as a great jumping off point for creating some biography projects and activities.

A printable may be more useful for students. Printables can come in handy for games and activities that you might be doing that include the presidents. If you need help downloading the printable list, check out these helpful tips. 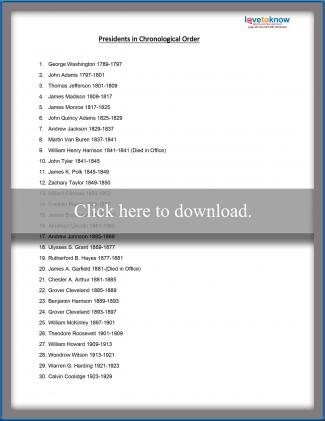 Having a list of the presidents in chronological order is great, especially if you are working with your students on memorizing them. However, memorization isn't always everyone's strong suit. Using the list to create games and activities will make studying the presidents much more fun. Try out some of these fun ideas in your homeschool classroom.

President of the Week

Using the list, create a president of the week feature. Starting from George Washington, you'll feature one president each week. Not only will you talk about something he's famous for besides being president but fashions, family, vice president, etc. This will help your student(s) to more fully understand and appreciate the presidents.

On a poster board, your student(s) will create a poster featuring all 45 presidents. In addition to adding their image in chronological order, they will add a fun quote and one fun fact.

Using the list as a jumping off point, have students create a slideshow, skit or video about each first lady. Starting with Martha Washington, students will create a fun and engaging skit about inspirational or important things that each president's wives did during their career.

Prestige of the Presidents

The U.S. presidents unit can be kind of boring for students. However, jazz it up by giving them a chronological list of the presidents and letting them get creative. Not only can creating projects be a great memory tool but it's a lot of fun. The printable can also be laminated and thrown in their folder so they always have it on hand.