Have you ever seen a water strider bug walking on water and wondered how he was able to do that without sinking? According to the USGS, the water strider is an example in nature of surface tension. The bug does not weigh enough to penetrate the surface of the water.

What Is Surface Tension?

The Merriam-Webster dictionary defines surface tension as: "The force that causes the molecules on the surface of a liquid to be pushed together and form a layer."

Surface tension is basically an elastic membrane formed by water molecules. It can be disturbed by detergents, which lower the tension of the water, heavy objects or by the water being stirred. A good example is the shape of a raindrop. The raindrop holds together because of surface tension, but when it strikes a hard surface, the raindrop bursts. To see the concept of surface tension and how it can be broken, try the two experiments below.

One of the easiest ways to show surface tension is to sprinkle something on the surface of water that is lighter than the water, such as pepper or dried herbs. Pepper creates the most dramatic effect as it is dark against the water, but you could also use a colorful spice such as paprika for the same effect.

What This Experiment Teaches 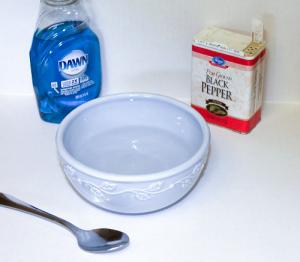 This experiment uses food coloring to show your child what happens when the surface tension of water is disturbed.

What This Experiment Teaches

This is a good experiment to begin teaching the concept of chemical bonds. Milk is made up of different vitamins and thus reacts a little differently than water to the surface tension, or chemical bonds, being broken. Where the pepper experiment saw the pepper scatter from the center out to the edges, this experiment will create a swirl of colors.

The dishwashing soap is polar on one end and non-polar on the other (bi-polar) and therefore weakens the chemical bonds of the milk and breaks the surface tension. 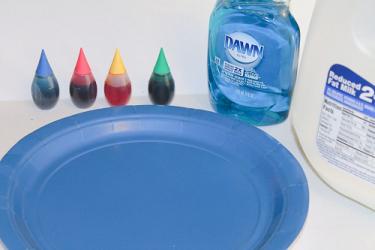