What Is the Tundra?

A tundra is a type of biome found on planet Earth. A biome is a certain area of land that is known for its specific climate, plants, and animals.

Tundras are one of the coldest types of biomes and are mostly found in the arctic around the North Pole and northern hemisphere. Tundras don't get a lot of rain and daytime in the summer lasts 24 hours a day.

Less than half of all tundras in the world are alpine tundras. This type of tundra is mostly found in the northern hemisphere of the world. Alpine tundras are found in mountains and occur at high elevations. They have really low temperatures, really strong winds, and no trees. Winter temperatures in the alpine tundra get down to about -18 degrees Fahrenheit.

Adaptations are ways animals have grown or evolved that help them live long and healthy lives in their environment. These are the things that help animals survive in the tundra. Some of the major characteristics you'd expect tundra animals to have are:

A chamois is a goat-like animal native to Europe and the Middle East. The fur of the chamois is a dark brown to black in winter, but turns a pale brown in summer. In the winter months, they grow a thick underfur to keep warm. 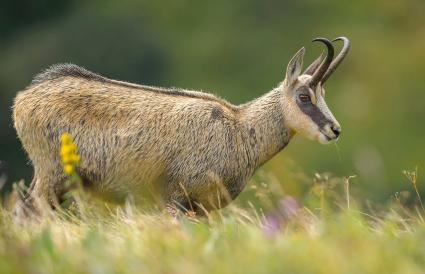 Elk are a large member of the deer family. Every winter they grow a thick coat of hair to keep warm and shed that hair in the summer to keep cool. One of the ways elk survive in the tundra is to move into the higher tundra elevations to feed in summer, then move to the lower elevations in winter. 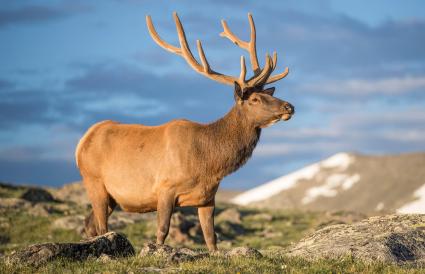 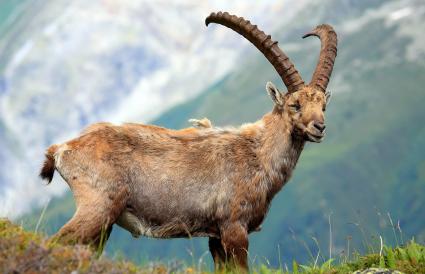 Jumping mice are a type of rodent found in alpine tundras in North America and China. Although it looks similar to a regular mouse, the jumping mouse has long hind legs and a long tail, like a kangaroo, to help it jump and balance. To survive in this climate, jumping mice hibernate during the winter. They spend their summers eating to build up the fat in their body that will keep them warm while they hibernate. 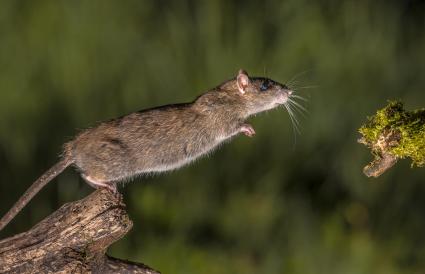 Marmots are large rodents that live in deep burrow systems where they can be safe from the high winds. They also live with large family groups to help keep warm. Marmots gather in the den of their burrows to hibernate together in the winter. To keep from freezing underground in winter, marmots wake up every ten days to raise their body temperatures. Another adaptive features of marmots is that they have a nail on one finger, instead of a claw, to help them dig in hard dirt. 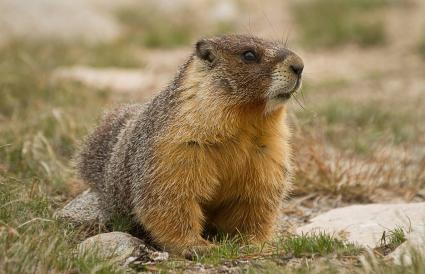 Mountain goats are large, hairy animals that aren't actually goats, they're more like goat-antelopes. The mountain goat's two-toed hooves help it climb mountainous terrains with ease. The rough pads on the bottoms of their hooves help them grip the hard land. They have white coats for camouflage in the snow and grow beards, and long coats to keep warm. 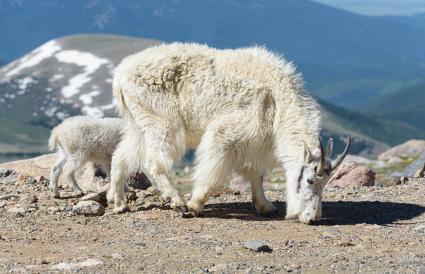 A pika is a small mammal that looks like a cross between a wild rabbit and a mouse. They are found in North America and Asia. Pikas have long fur that covers their feet to keep them warm. Some species of pika live in burrows, but many live in nest build in deep piles of broken rock. Rock-dwelling pikas create a haypile, or a collection of food, that they store to use during the winter months. 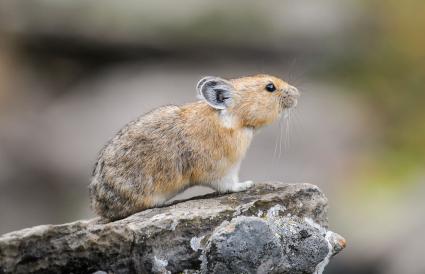 Voles are small mouse-like rodents. Voles have very dense fur to keep them warm. They travel through elaborate tunnel systems in the snow or underground to avoid predators and high winds. 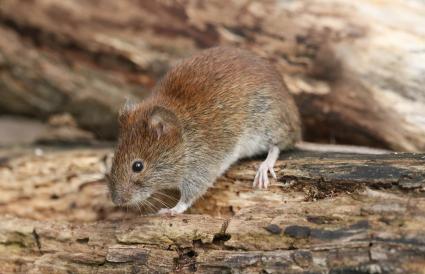 Animals that live in the arctic tundra are some of the toughest animals on Earth. Weather conditions can be extremely cold with lots of snow, and food sources can be scarce.

The arctic fox is able to survive in the cold thanks in part to its fur on the soles of its feet, short ears, and a short muzzle. They live in burrows to avoid the extreme weather while they sleep. Their coat is white in the winter, which helps them blend in with the snow, and brown in the summer to help them blend in with rocks and dirt. When food is hard to find in winter, arctic foxes will follow behind polar bears and eat the scraps they leave behind. 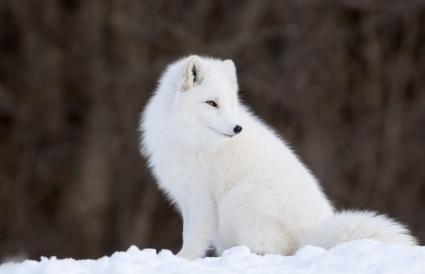 Short, thick ears help keep the artic hare warm in winter. They have thick fur and sometimes huddle with other hares to keep warm. Arctic hares are found in North America. Like the arctic fox, the artic hare has a white coat in winter and darker coat in summer. 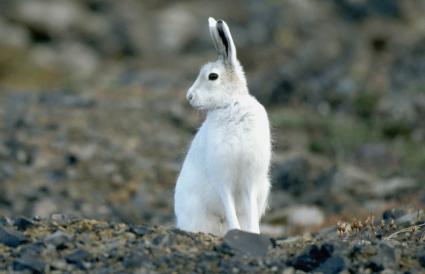 Artic wolves are found in Greenland and in North America. They have white coats that help them blend in and hunt in the snow. Small ears and a small muzzle help artic wolves retain body heat. They typically live in caves because they can't dig burrows in the permafrost. 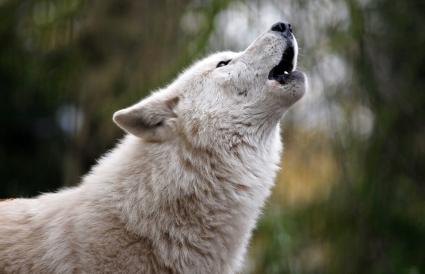 Caribou are large deer native to North America. Caribou actually survive in the tundra by not living there all year long. They make a great migration just before summer to get to their tundra grazing grounds. Some herds travel up to 600 miles. Then, when it starts to snow, they head back south. The underside of a caribou's hoof is hollowed out to help them dig through snow for food. 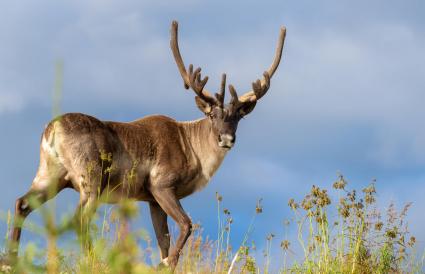 The jaeger is a type of bird that resembles a sea gull. In some places, jaegers are called arctic skuas. They live mostly at sea, but head to the tundra to breed in the summer. They use the less crowded tundra to lay and hatch their eggs. 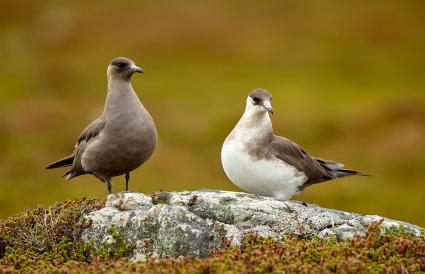 Lemmings are small, mouse-like rodents. Lemmings actually change their homes in winter and summer months to account for the changes in weather. In winter, they live in underground burrows using nests made of grasses, feathers, and musk ox wool to keep warm. In spring, they move to higher ground and live in forests or shrubs. Lemmings use their one flattened claw on each front foot to dig in the snow for food. 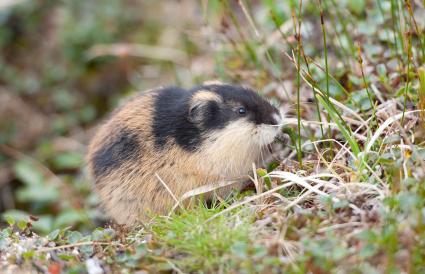 Musk oxen are large mammals that roam the arctic tundra grazing on roots, mosses, and lichens. They have long shaggy hair that grows in two coats, an undercoat and outer hairs. At the end of winter, the undercoat falls off. 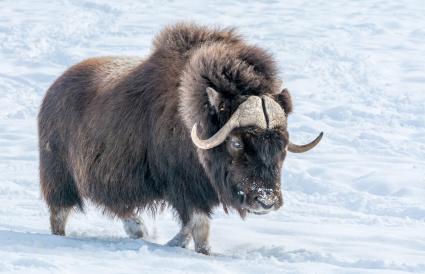 The polar bear is one of the most recognized arctic tundra animals. These giant white bears have a thick layer of body fat and a water repellant coat to help them withstand cold temperatures in the sea and on land. They live on the sea ice near the Artic Ocean and the fur on the bottom of their feet helps them grip the ice. Underneath their white fur, polar bears have black colored skin that helps soak up the sun's rays. 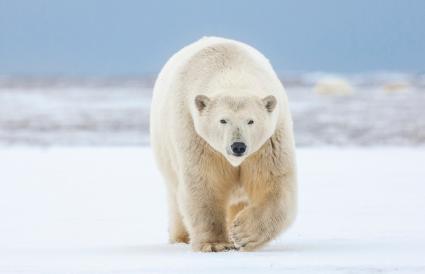 A ptarmigan is a type of bird from the grouse family. Ptarmigans are sometimes called snow chickens because they look similar to chickens. They have completely feathered feet to help keep them warm. In winter, their feathers are white to blend in with the snow, but in spring and summer their feathers turn gray or brown. To survive in the cold winters, ptarmigan burrow into the snow to sleep. 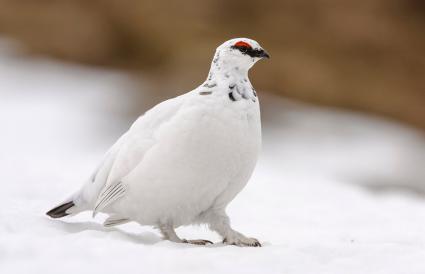 Although caribou and reindeer are the same species, there are some differences between these two animals. Reindeer are native to northern Europe and Asia. Like caribou, tundra reindeer travel into the tundra to eat in summer and leave the tundra in winter. The hairs of their outer coat are hollow, which helps insulate their bodies.

Snow buntings are a type of bird sometimes called snowflakes because of the way the look when flocks fly through the air and land. Their white coloring with some black or brown, depending on whether they're female or male, helps them blend in with the ground as they forage for food in the tundra in spring and summer. Snow buntings don't live in the tundra in winter. 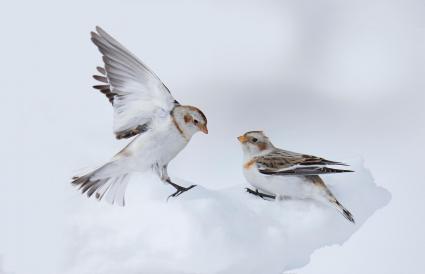 The snowy owl has white feathers mixed with some brownish or black feathers. Snowy owls have feathered feet and sharp talons to help them stay warm and walk on snowy surfaces, like branches. While some snowy owls do stay in the tundra throughout winter, others follow their food sources wherever they go in winter. 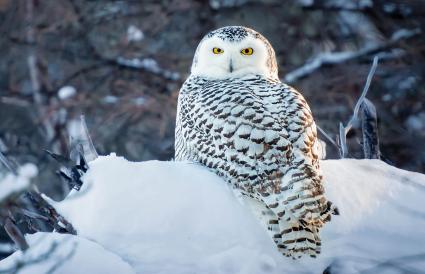 Life In the Tundra

While it may seem impossible for animals to survive and thrive in freezing temperatures with thick ice and snow, many big and small animals have found ways to live in the tundra. If you loved learning about the strong animals of the tundra, check out the cool desert animals that have adapted to living in extreme heat. You can also explore interesting animal facts to learn about a variety of unique animals.