Meriwether Lewis and William Clark led an expedition with the Corp of Discovery to see what was beyond the Eastern portion of what is now the United States of America's mainland. Find out what Lewis and Clark discovered, the dangers they faced, and how they accomplished their goals with a lesson and fun facts about their famous expedition.

When the explorers set out to discover the West, they didn't have a lot of information, but were able to write about what they saw and where they went. This helped officials piece together maps of the area. Click on the image of the lesson plan to download and print a detailed lesson plan. You'll also need to print the timeline and U.S. map printables for this Lewis and Clark Blind Mapping lesson plan. Use the Adobe guide if you need help to access the printables. 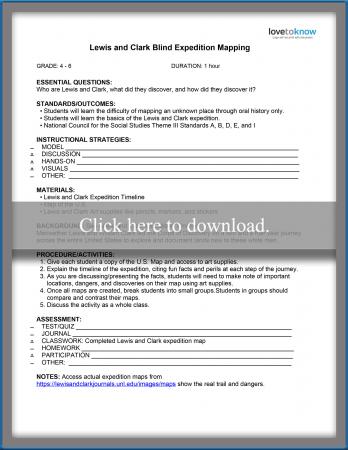 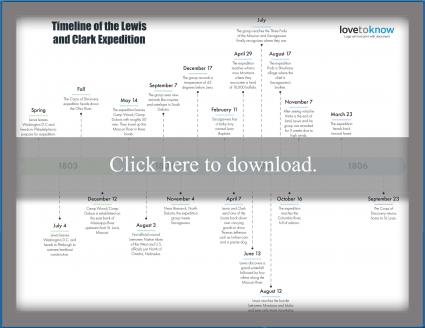 For this lesson, you'll also need a map of the U.S. that features both modern and historically accurate areas of importance. The map reflects what the country looked like from 1803 to 1809 and shows all the modern day states. You can also use the map for other lesson plans that take place during this time period. 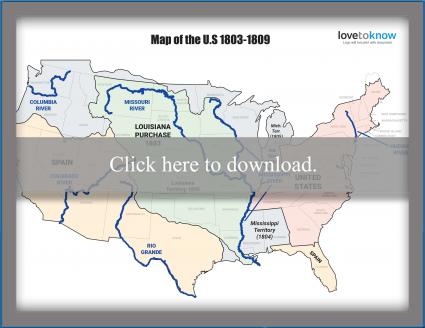 Kids in grades four to six will make their own Lewis and Clark expedition map based on oral history alone in this fun lesson. As you present a timeline of events and locations from the expedition, students will attempt to mark these points on their map of the U.S. Kids will need to listen carefully, make inferences, and understand basic mapping skills such as direction.

The printable Lewis and Clark lesson plan includes a timeline of the expedition and a map of the area they explored. If you want to expand the lesson or adapt it for younger kids, you can include more materials like these:

You can follow the timeline of the Lewis and Clark expedition to learn all the places the group visited and some of the simple things they did in their camps. While the journey was harsh, there were some funny, interesting, and inspiring things that came out of it.

Cool Facts About Lewis and Clark

Who were Meriwether Lewis and William Clark? Find out with these cool facts about the men tasked with leading this epic expedition.

Interesting Facts About the People Lewis and Clark Met

Lewis and Clark had a lot of help from both friends and strangers as they trekked across uncharted lands. 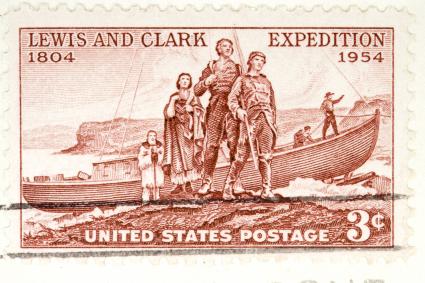 Fun Facts About the Lewis and Clark Expedition

Lewis and Clark's expedition was supposed to help people understand what lie between the Mississippi River and the Pacific Ocean and locate the Northwest Passage. Today you can visit the actual Lewis and Clark Trail in Washington state and hike their real trail from the Missouri River to the Pacific Ocean. If you're not able to get out and hike the trail, you can use an interactive Google map to see their route and learn facts about different places.

While Lewis and Clark are names every kid learns, they couldn't have had a successful expedition without the help of a lot of friends and strangers. Learning about explorers for kids helps you see how people discovered new places, plants, animals, and cultures through bravery and teamwork. You can learn more about Lewis and Clark with history board games, like The Lewis and Clark Adventure Game, or by reading historical fiction for children.