According to Artcyclopedia, Claude Monet was a French impressionist painter who lived from 1840 to 1926. The Metropolitan of Art History lists him as one of the key figures in the Impressionist movement and states that he "transformed" French painting during the latter half of the 1800s.

About Monet and Impressionism

Monet grew up in Le Havre, France. He started out as a caricaturist, but was later mentored by Boudin who taught Monet to appreciate landscapes. By 1862, he had started painting with other impressionist painters such as Renoir, Sisley and Bazille and they began to form a unique style.

One of the founders of Impressionism, the term comes from the Monet painting titled "Impression Sunrise." Monet's approach to art was unique for his time. Instead of a traditional landscape painting that looked as the landscape appeared, Monet began to think outside the box. His paintings were soft, watery and meant to capture an overall concept or feeling rather than depicting the exact image.

Monet was completely devoted to the idea of oil landscapes in his beloved impressionist style, so it is befitting that the movement was named after his painting. Some of his well-known paintings include:

Creating the soft look of a Monet painting is difficult with oil paint. Younger children will find it easier to work with watercolors, which is what this project uses. However, they should be informed that Monet used oil as a medium and encouraged to move into oil paints as they gain experience with the style of Impressionism. 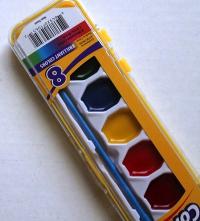 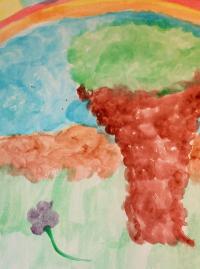 Remember that Impressionism is meant to capture a mood or a feeling. Ask your child:

Art projects are a way for children to express what they see around them. Learning about impressionists like Monet helps a child see that art doesn't necessarily have to be detailed masterpieces, but can simply be an expression of the mood of a place or time.