Ancient Egyptians used hieroglyphs to write letters, words, and numbers starting around the year 3,000 B.C. Although this form of writing is no longer used, you can learn to read the ancient script and see how it relates to writing systems today.

Hieroglyphics is what people call the way of writing that includes individual pictures, or drawings, called hieroglyphs used in Ancient Egypt.

"Hieroglyphics" is a Greek word that means "holy marks" because of how the symbols were originally used. Egyptians believed in a life after death and being remembered helped you get to that afterlife. Hieroglyphs were used to carve the names of pharaohs into their tombs to help them get to their afterlife.

The 1799 discovery of the Rosetta Stone was the first step toward understanding how to read hieroglyphics for modern people. This large stone tablet showed Greek words next to hieroglyphics and one other Egyptian form of writing. Since people could read Greek, they could tell the tablet said all three writing samples were copies of each other. Many tried to decode the ancient language, but it wasn't until 1822 that Jean-François Champollion completely deciphered it.

Learn how common numbers, letters, sounds, and objects were written using hieroglyphs by clicking on the image of the Egyptian hieroglyph chart. If you need help using the free printable, check the Adobe Guide. 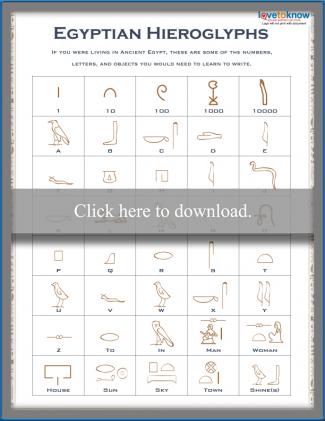 The trick to understanding hieroglyphs is that a picture could stand for exactly the image it shows, the sound that object made when spoken, or it could be a symbol for a similar word. So, a picture of an eye could mean an actual eye, the sound "I," or "to see." Letters and words are formed by using a single picture or putting a few close to each other. There are three basic types of hieroglyphs:

Egyptian Hieroglyph Numerals started out with only a few symbols that were combined to create a single number. Think of it like your math with ones, tens, hundreds, and thousands places. You can write a 10 easily using one hieroglyph, but most other numbers require a lot of hieroglyphs. For example, to write 155 you would use the symbol for 100, five symbols for 10, then five symbols for 1.

Reading hieroglyphics is tricky because you have to first figure out if it is meant to be read from left to right or right to left. Look at the characters, especially animals or people, in a line to see which way they are facing. That is the direction you read in.

Only priests, officials, and the craftsman who carved the hieroglyphics really needed to know how to write or read them. Most common people could not read and write the symbols. Hieroglyphs were carved into stone with chisels and hammers or painted on wood on important monuments, tombs, temples, and statues. Although they can be read in two ways, hieroglyphics were written from left to right in horizontal rows and occasionally in vertical rows on doorways.

Now that you know the basics of hieroglyphics, try reading and writing like the Ancient Egyptians did.

Write Your Name in Hieroglyphics

Use the printable chart and a hieroglyphics worksheet to see if you can write your own name in hieroglyphics. Remember, each picture could represent a sound or an actual word, so there might be more than one way to write your name. 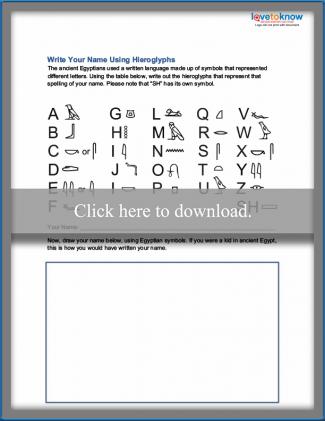 Write your name in hieroglyphs.

Print free handwriting practice paper and try writing sentences that are read from right to left. Use the hieroglyph chart to try out these simple sentences first, then come up with your own.

The original Rosetta Stone featured the same words written in three different languages. You can make a simple version with a rock and a permanent marker. On one side of the rock write a word or sentence in English. On the other side, write the same word or phrase in hieroglyphs.

Create your own poster using a free, printable mummy coloring page and the hieroglyph chart. Come up with a short, motivational phrase using the hieroglyphs. Add the symbols to the squares in the pyramid on the Mummy Cat Coloring page, then color the rest of the page. 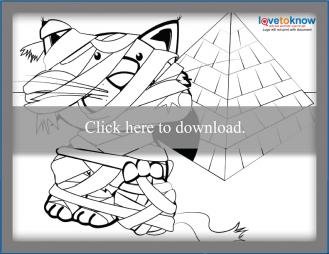 Connecting the Past and Present

Hieroglyphics are an early form of communication, but they aren't so different from how you read and write. What examples can you find of symbols people still use today to represent sounds, words, or ideas?