Food chains show the dietary relationships between all living things. A food web may contain several interconnected chains. Studying food chains and webs at the high school level will enable you to see this interconnectedness and to understand the complex relationships of energy and matter flow within an ecosystem. To open and download the worksheets, click on the image you require and a PDF should open up. If you need help, follow this guide for working with Adobe printables. 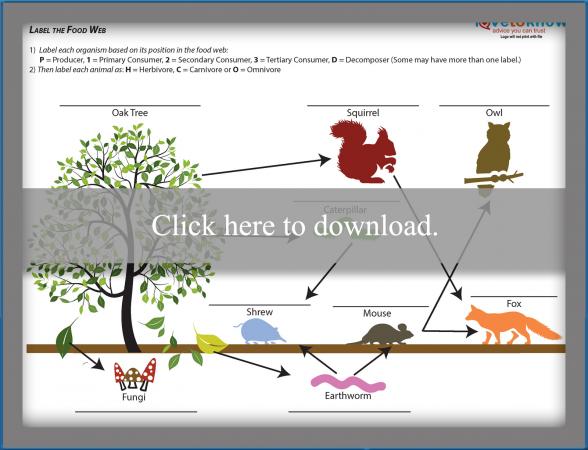 Worksheet one can be considered a learning activity which will help consolidate your ideas in graphic form. The first part of worksheet one contains a food web which can be found in a woodland ecosystem. There are several food chains within this web. Some examples of these are:

Trophic levels can be described as the feeding positions of particular organisms within a food chain. CK-12's trophic level table provides extensive information on trophic levels.

The Movement of Energy

Trophic levels in a food chain can also be discussed in terms of energy. The pyramid depicts how both energy and substances are passed from one trophic level to the next, and how much of the energy is lost to the environment. Approximately ten percent of energy is passed on from one level to the next. That is why a trophic pyramid is usually pyramid shaped.

An Example of a Trophic Pyramid

The first level of the pyramid might be clover plants. This level will always be a producer. It takes many clover plants to support, for example, a snail population which feeds upon it. Therefore, the next level would show that there were fewer snails than clover. In turn, birds might feed upon the snails and there would be fewer birds than snails. The final level in this pyramid might be birds of prey, such as hawks. There would be an even smaller number of hawks which could survive upon the population of other birds. However, it is important to note that if the producer in the food chain is a single tree, the trophic pyramid would look less like a pyramid and more like a diamond because one tree might support a large number of primary consumers. For more information and images of trophic pyramids see Britannica.com.

Biomass is also depicted as a pyramid. It describes the mass of the organism or organisms available at each level of the chain rather than the population. This BBC high school guide provides an in-depth review of biomass. 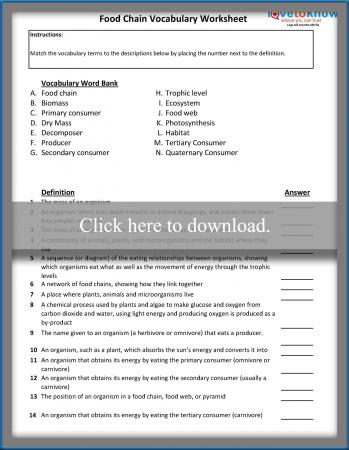 Have your student match the definitions on the left labeled A through N to the vocabulary terms on the right. They may choose their answer for each and fill in the correct letter in the column on the right.

Administer the five multiple choice questions as a mini quiz.

You may remember many of these words and terms from your study of food chains at the elementary or middle school level. If you missed out, this helpful article will provide an introduction. In case you need a vocabulary refresher, here are some useful terms:

The Circle of Life

It is important to remember that all organisms within a particular environment are interconnected and are dependent upon each other for their food and survival. Food chains begin with producers who use photosynthesis to obtain nutrients from the sun and end with the highest level of consumers found in that particular environment. When those consumers die, the decomposers ingest their nutrients and provide sustenance to consumers in their turn. Food webs and food chains are part of the circle of life.