Teaching About Hieroglyphs With Worksheets

Note that you can use Adobe to download these worksheets. 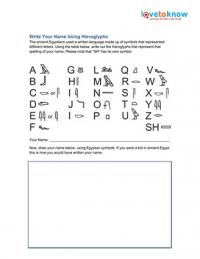 This worksheet teaches students the symbols for the letters of the alphabet. Students will:

To add to the fun, have your student draw out all the names of family members, friends or teachers.

Tell a Story With Hieroglyphics 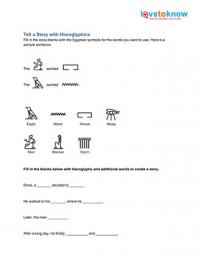 Ancient Egyptians created sacred carvings that told a story. Some stories were legends and some were simple tales of a life lived. This worksheet allows students to create stories using hieroglyphs. The student simply fills in the blanks to create a unique story. 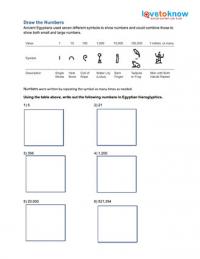 Ancient Egyptians also used symbols to represent numbers. These symbols could represent a small number or a large number. With this worksheet, students will learn the symbols for:

Students are also presented with a series of different numbers and a blank box. The student will fill in the box with the correct symbols to show that number.

Understanding the symbols used by ancient Egyptians provides insight into their society. They used symbols at burial sites, to communicate and to leave behind a message for future generations. You never know; your child may grow so interested in these ancient symbols that he becomes an archeologist and discovers new carvings that have never been seen before.