Stars may be balls of gas and dust held together by gravity, but they are also the iconic lights of the night. Learning about stars with star life cycle worksheets will add understanding to kids' astronomy and space science lessons. Stars are "born," age, and "die," and the study of their life cycle unlocks one of the mysteries of astronomy. Click on the worksheet you want to try, and use this handy guide for troubleshooting.

To begin your star life cycle lessons, you'll want to help kids understand the different terms used when describing stars and what helps make them. This types of stars matching worksheet asks young astronomers to draw a line from the type of star to its correct definition. This life cycle of a star worksheet comes with an answer key. 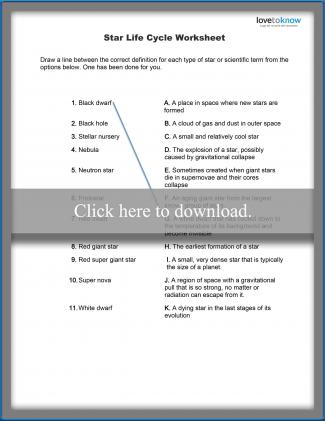 You can incorporate this worksheet into several lesson plans covering astronomy. The worksheet itself is suitable for third graders and up, but can be adapted to suit different grade levels and abilities.

This worksheet covers the basic stages of a star's life cycle. In order to explore the actual steps in the life cycle of a star, kids need to know and understand these terms.

Stars are born in nebulae, or clouds of gas and dust located in space. Turbulence and gravity instigate a fusing effect, causing the center of the dust and gas area to heat up and become what is known as a protostar. This brand new beginning of a star will, in time, become a full star which will then age and die according to the dictates of the star life cycle. 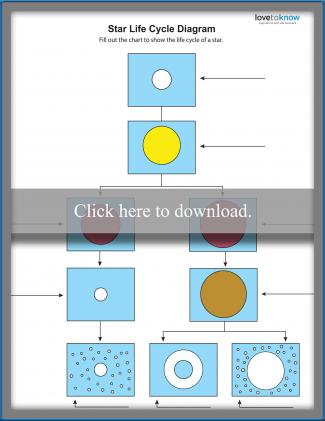 This diagram could replace the vocabulary worksheet as your first introduction to star life cycles, or they can be used together.

The NASA science website explains this process in great depth, but here are some basic facts you can share with this worksheet.

Kids of all ages can use this life cycle of a star coloring page to illustrate what the real stages of a star's life cycle look like. Kids are asked to add an image to each empty box that illustrates the relative size, shape, and color of the labeled star. 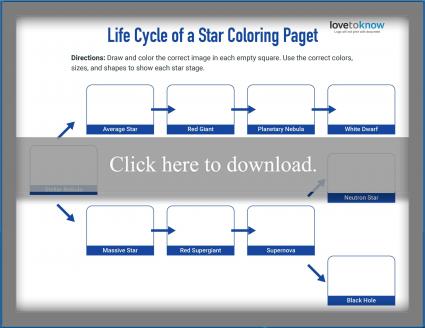 There are many ways younger kids and older kids can complete this worksheet.

The first stage in the life cycle of a main sequence star involves the star actually forming and turning into that type of star. This fill-in-the-blanks star life cycle quizlet worksheet asks kids to choose words from a word bank to complete the sentences that describe this process. Older kids in grades three and up can complete this worksheet on their own. 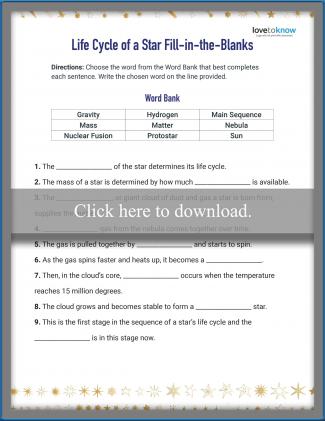 You can use this as a worksheet or as a quizlet. Other ways to use the worksheet include:

Life cycle of a star worksheets are just the beginning of awesome astronomy lessons for kids.

Seeing Stars From Start to Finish

Kids tend to understand and relate better to other living things. Presenting stars as living things that are born and die can help kids better understand how these beautiful things are formed. Once kids learn about the life cycle of a star, the sky will never look the same again.