If you've seen the movie Teenage Mutant Ninja Turtles, you've heard the name Michelangelo. What you may not know is that this name also belongs to a famous artist from the fifteenth and sixteenth centuries. His full name was Michelangelo di Lodovico Buonarroti Simoni. He was Italian born in 1475 in Caprese, and he lived until 1564. According to Biography.com, he was the most famous of all the artists from the Italian Renaissance. 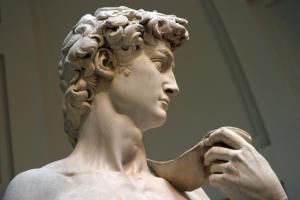 Michelangelo is probably best known for painting the beautiful Sistine Chapel ceiling. However, he wasn't just a painter. He was also a sculptor, poet, and architect. Today, we refer to him as a "Renaissance Man," which means that he was highly skilled across a lot of different disciplines.

Although his family was made up of bankers, Michelangelo studied as an apprentice to a painter where he learned a technique called fresco. Later, he studied in the sculpture gardens of the Medici family. Fresco is a type of mural painting where earth tones are applied to wet lime plaster. As the plaster dries, the pigments bond to it and become a permanent part of the wall.

Michelangelo also loved to sculpt statues from stone, and he considered himself more of a sculptor than a painter. His most famous works are a sculpture of a young man known as "David," and a sculpture of Mary holding her crucified son Jesus on her lap, which is known as the "Pieta."

After creating "David" in Florence, Italy, Michelangelo returned to Rome in 1505. Shortly after that, the Pope hired him to paint the Sistine Chapel's ceiling. Even though Michelangelo thought of himself as a sculptor, he couldn't tell the Pope no. He agreed to the project, but painting the ceiling was not easy.

Other interesting facts about the Sistine Chapel artwork include: 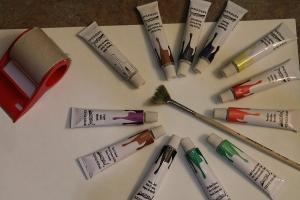 Would you like to experience a little of what Michelangelo did as he painted the Sistine Chapel? Give this project a try. You can download and print it using Adobe.

To truly recreate the Michelangelo experience, you'll need to lay on your back and paint on a surface above you. 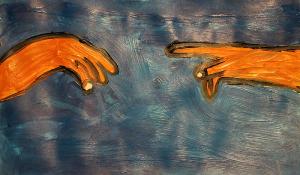 Sample of The Creation of Adam

You'll soon discover that Michelangelo's task was far from easy. Just painting a small poster board may take you a long time, and you'll quickly see why it took Michelangelo four years to complete his masterpiece. Not only did he paint in this uncomfortable position, he created a detailed piece of art that is admired to this day.