Learning about the attack on Pearl Harbor and the beginning of World War II is an important part of American history. Parents can help their upper elementary, middle and high school students learn about this event and its significance through a lesson and activities. 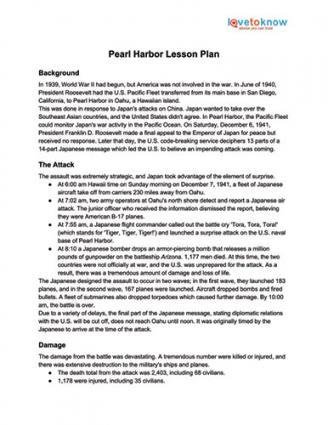 Discovering what, when, why and how the attack occurred can help your student understand the nature of this historic event. You can explain main points in the background, the attack itself, and its aftermath to help your child grasp the significance and impact of the strike.

In 1939, World War II had begun, but America was not involved in the war. In June of 1940, President Roosevelt had the U.S. Pacific Fleet transferred from its main base in San Diego, California, to Pearl Harbor in Oahu, a Hawaiian island.

This was done in response to Japan's attacks on China. Japan wanted to take over the Southeast Asian countries, and the United States didn't agree. In Pearl Harbor, the Pacific Fleet could monitor Japan's war activity in the Pacific Ocean. On Saturday, December 6, 1941, President Franklin D. Roosevelt made a final appeal to the Emperor of Japan for peace but received no response. Later that day, the U.S. code-breaking service deciphers 13 parts of a 14-part Japanese message which led the U.S. to believe an impending attack was coming.

The assault was extremely strategic, and Japan took advantage of the element of surprise.

The Japanese designed the assault to occur in two waves; in the first wave, they launched 183 planes, and in the second wave, 167 planes were launched. Aircraft dropped bombs and fired bullets. A fleet of submarines also dropped torpedoes which caused further damage. By 10:00 am, the battle is over.

Due to a variety of delays, the final part of the Japanese message, stating diplomatic relations with the U.S. will be cut off, does not reach Oahu until noon. It was originally timed by the Japanese to arrive at the time of the attack.

The damage from the battle was devastating. A tremendous number were killed or injured, and there was extensive destruction to the military's ships and planes.

As a result of the surprise assault on Pearl Harbor, on Dec. 8, 1941, U.S. President Roosevelt addressed congress in a compelling speech that proposed declaring a state of war with Japan due to the attack. In the speech he refers to the date of the Pearl Harbor battle as 'a date which will live in infamy,' and the speech is therefore known as the Day of Infamy Speech or Infamy Speech. Congress approved the declaration of war on Japan, and on that day, the U.S. entered into World War II.

After teaching key points about the battle, you can ask your student questions about Pearl Harbor. She can write down the responses, or just answer verbally, so you can evaluate how well your student picked up the material. Sample questions may include: 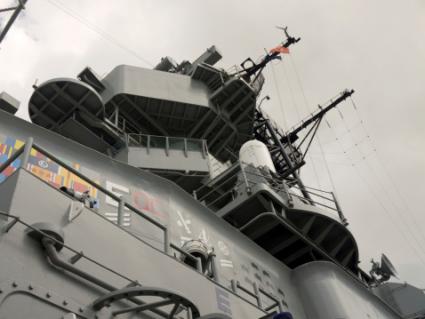 After discussing Pearl Harbor and its significance, parents can use one or more activities to help children understand more about this historic event.

Using markers and a small poster board or card stock, have students create a timeline of the day's events. Parents and children can discuss the significance of each event and how it related to the overall disaster. This activity is good for upper elementary and middle school students. Parents can expand the activity for high school learners to find and include additional events that occurred in the days before and after as well.

Listen to the President's Day of Infamy Speech

National Geographic offers an audio resource of President Roosevelt's Day of Infamy Speech. You can have your child listen to the audio, and then discuss together the impact of the speech, why the President himself didn't declare war, why House of Representatives member Jeannette Rankin might have opposed it, and how the people were feeling at the time. This activity works well for middle and high school ages.

Look at the location where the battle happened using an interactive map, such as:

These maps help combine the events of the day with specific locations of where things occurred, such as where the Arizona was located when it was bombed. These make great visual tools and are good for middle and high school youth. For younger students, parents can also work with a globe or world map to locate a few key areas, such as Pearl Harbor in relationship to Japan.

Have students listen to a radio broadcast of the attack or audio clips from individuals the day after Pearl Harbor. Then have your child write a fictional journal entry about what he or she might have been doing when the strike occurred and how he or she might feel the day after the disaster. This can be adapted for various age levels - upper elementary students can do this in a simple paragraph, while middle and high schoolers can make it more of an extended essay and incorporate other facts from the history of the time period that they may have learned.

A Part of History

Although devastating, Pearl Harbor is an important event to learn about. For more resources about this day, visit:

Parents can help their students understand this historic event, and its incredible impact, by teaching key facts, having discussions, and doing activities together that bring this historical event to life. If you're looking for another social studies lesson, check out these Egyptian hieroglyphics facts and activities.