Vincent van Gogh, a Post-Impressionist Dutch painter, was born on March 30, 1853 and lived until July of 1890, according to his biography. Although he started drawing as a young child, most of his 2,100 works of art were completed in the last ten years of his life. His work has had an impact on art throughout the 20th century, particularly on the Fauves and German Expressionists.

Van Gogh As an Artist

Although he began drawing as a young child, van Gogh didn't pursue his art seriously until he became an adult. He began by working for art dealers. It wasn't long before he decided to become a painter. He studied his art for several years and then created his first artwork in 1885, which is called "The Potato Eaters."

When he first started painting, van Gogh used very dark colors as his palette. Blacks, dark blues, purples and deep reds all appeared in his early work. However, once he was exposed to Impressionism and Neo-Impressionism during his time in Paris (1886 to 1888), the overall look of his art began to change, and he started to use brighter colors in his paintings.

Illness Leads Him to Arles

Unfortunately, van Gogh suffered from depression and illness. In February of 1888, he moved to Arles where he hoped he might find an art colony that he believed would be the perfect and peaceful place to live. It was during his time in Arles that he began to draw and paint the local landscapes.

The Play of Light and Shadow

He was particularly interested in the way the light played on the landscapes and he began including yellow, mauve, and greenish-blues in his work. Some of the paintings he completed while in Arles included "The Yellow House," "Bedroom in Arles," and "The Red Vineyard". 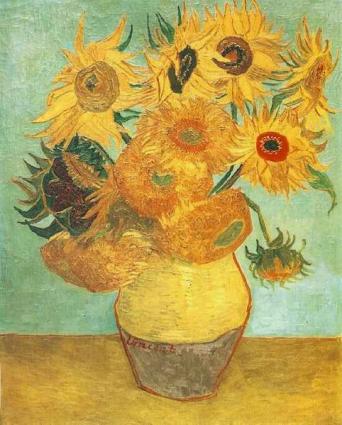 It was also during his time in Arles, France, that van Gogh noticed the beautiful fields of sunflowers and was enchanted enough with them to create a series of paintings featuring the joyful flowers.

An artist friend, Paul Gauguin, came to visit and paint with van Gogh while he was staying in France. To welcome his friend, van Gogh created sunflower still-life paintings to decorate Gauguin's room.

Paint Your Own Sunflower

Would you like to decorate your own room with a brightly colored sunflower? It's easy to recreate van Gogh's bright colors and simple lines. You may have to work on the lighting a bit to come close to his mastery of light and shadow. You can also download and print this project using Adobe.

How to Create the Sunflower 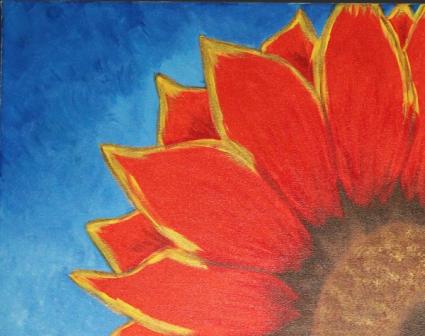 Start by outlining a sunflower on the canvas with your pencil. In the sample at the top of this page, one large sunflower is featured in the corner. You could also draw a vase with sunflowers or several sunflowers, depending on your drawing skills. Beginning artists will find it easiest to draw one large flower with big petals.

Finding Inspiration in the Artist's Work

Although Vincent van Gogh only lived to the age of 37 and suffered from mental issues he was unable to overcome, he left behind a beautiful collection of work that artists study to this day. Since his work changed over the span of his life, try to recreate other works by him to get a feel for the broad range of his artistry.